In response to the Coronavirus (Covid-19) outbreak, please read our book with confidence policy and guidance for guests for up to date information.

Flight of fancy at Pigeon Loft

Once used as an overnight jail, Pigeon Loft in Kirk Yetholm is now a comfortable country cottage. The owner spoke to Nichola Hunter 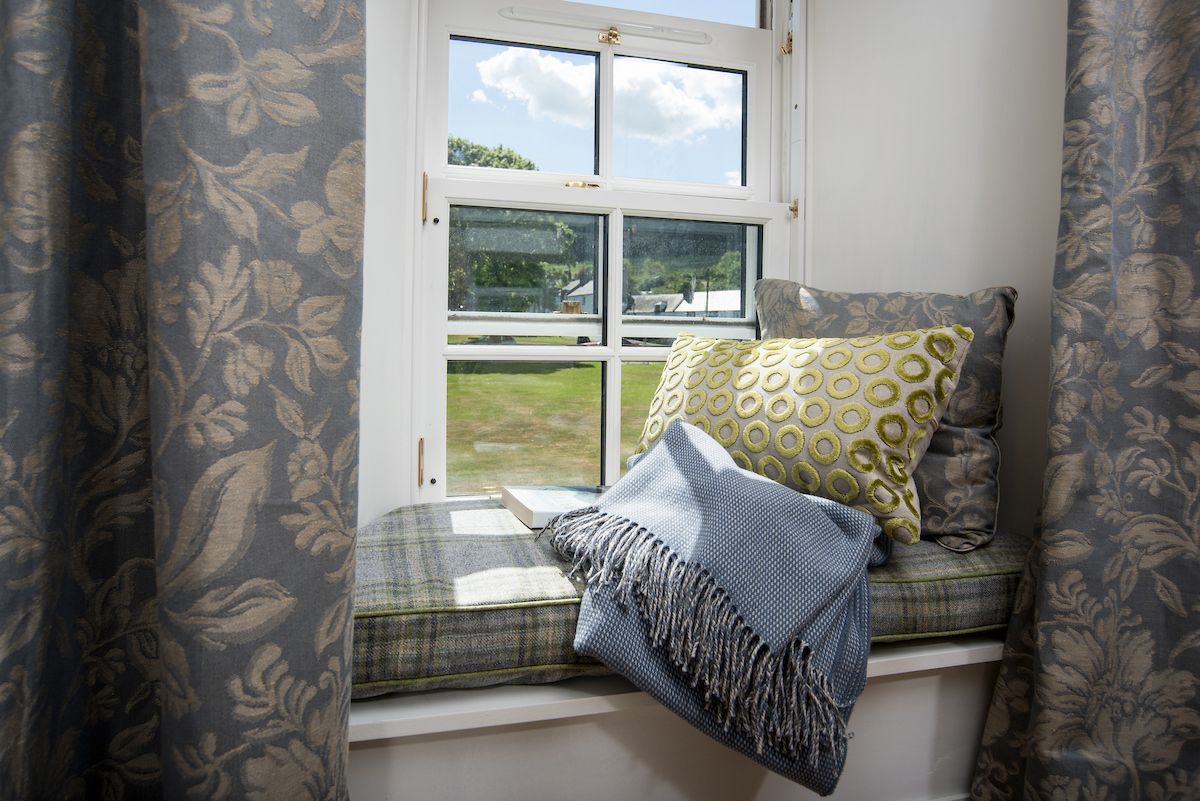 This was published in 'Scotland on Sunday' on 6th August 2017 and is reproduced here with their kind permission.

When Amanda and Dan and their children moved into the Green on the Green in Kirk Yetholm in 2011, the terraced property included a main house in which the family live and an adjoining dilapidated cottage – the Pigeon Loft. “The cottage wasn’t really functioning other than as a garage and store,” says Amanda. “We knew once we’d sorted out the house that we would try to restore it.”

Two years ago, work began on the cottage in earnest. “It dates back to the early 18th century when records show that there were five alehouses between the two villages to refresh the drovers. Rumour has it that the Pigeon Loft would be used as an overnight jail when things got out of hand.”

In later years, the village doctor owned the property and used the cottage as a garage to house his sports car. “Apparently he used to set off from the garage across the middle of the green, dashing to his appointments. The surgery was held in the main house and his consulting room is now our study.”

By the time the family moved in, the cottage was dilapidated. “The roof was leaky and unstable and the pigeons had taken over. It was quite alarming but we decided that with a bit of thought we could convert it into a holiday let.”

The first hurdle was planning permission. In the 1970s, the council had noted the garage doors the doctor had fitted and decided to list them. “This of course meant that we couldn’t remove them and restore windows on the ground floor, so we had to have a rethink,” says Amanda. The solution was to create a hallway and utility/boot room on the ground floor and build a new staircase to reach the first floor. 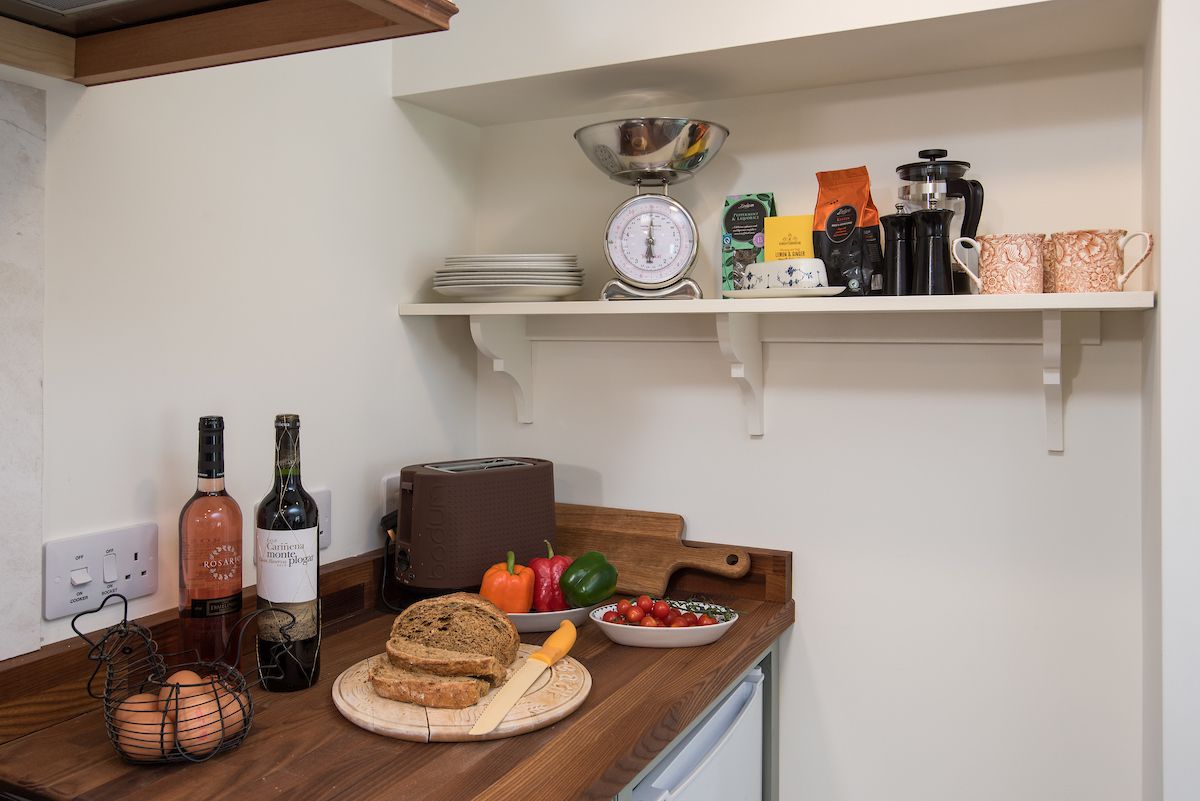 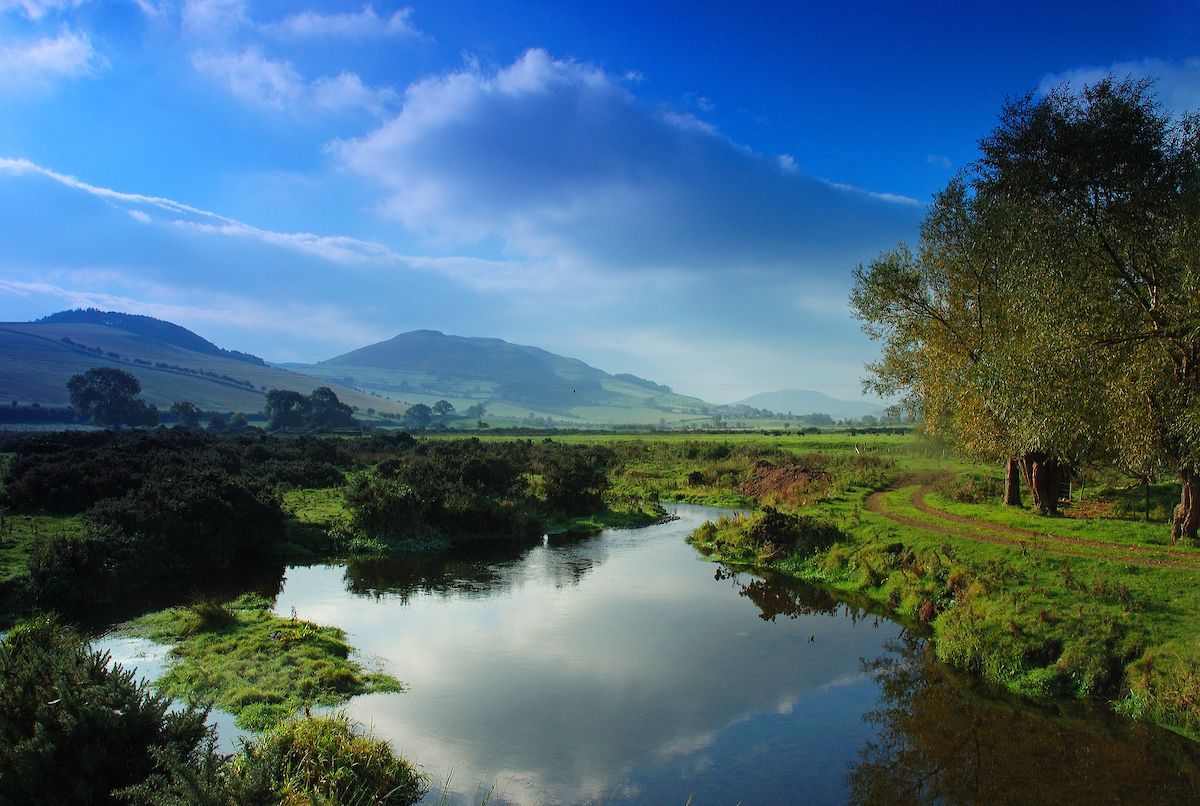 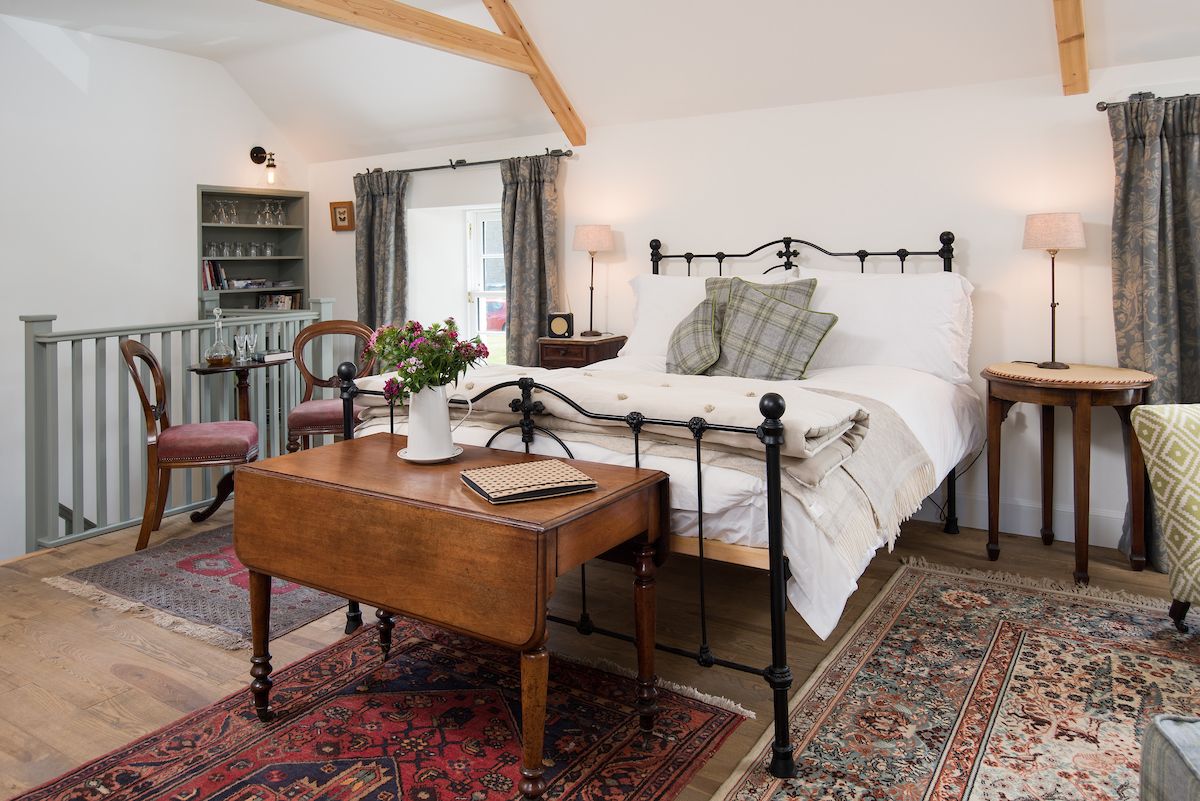 “The original spiral staircase was at the rear of the building under a mono-pitched roof and was mostly rotten. Having removed it we were able to create a second storey which gave space for a shower room and then we built a new staircase at the front. We left the rest of the living space as one open plan room. Really the cottage is as simple as could be. It feels authentic – we just hoped to make it better than it was before.”

Twenty-seven feet long by 17 feet deep isn’t a small space, but there was a lot to fit in. Amanda says: “I drew it about a hundred times. To start with we thought we’d have the staircase in the centre but we quickly realised how much space it would require and how much it would restrict the living area. And once it was insulated and plastered, the space shrank again.”

Amanda’s joiner built the kitchen bit by bit from her sketches. “We had to do it a piece at a time to ensure that we could get a full-size cooker and fridge in. It was fun to draw and it was fun to imagine, but then the enormity of the painting and decorating kicked in. I wanted it to feel like you’d stepped back in time – a turn of the century lodging, perhaps in the style that a doctor’s chauffeur or his housekeeper might have lived.

To create this effect involved some careful decorating and shopping. “We fitted Caithness flagstones downstairs, but upstairs I wanted a traditional wooden floor. This area is full of ash trees so a solid ash floor seemed appropriate. We also managed to retain the original fireplace during the renovation even though the architect was keen to cover it up. Rory Stewart from Jedburgh skillfully repointed all the stonework to keep its character and give the loft its focal point. We also toyed with the idea of fitting a wood-burning stove, but for practical reasons for guests and the fact the living space is all one room we opted for a cast iron electric stove instead.”

For the decor, there were no such quandaries. “My role as an interior designer at Countryside Kitchens and Interiors has given me the experience to understand which colours will work together. Simplifying a colour scheme always works best, and allows for the addition of pattern and texture in the soft furnishings. I tried to keep the palette to about three colours and I used Farrow & Ball’s Pigeon – of course – on the kitchen cupboards and banisters and Wimbourne White on the walls. The exterior woodwork is painted in Downpipe.” 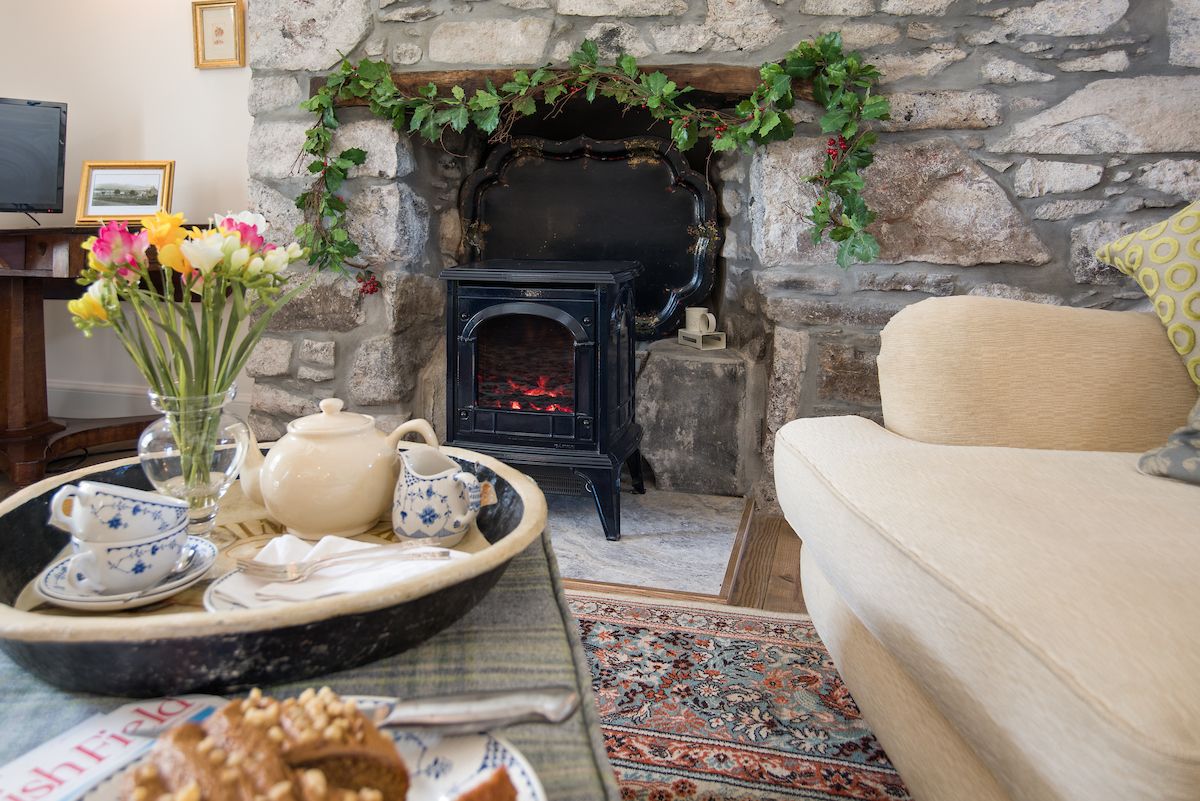 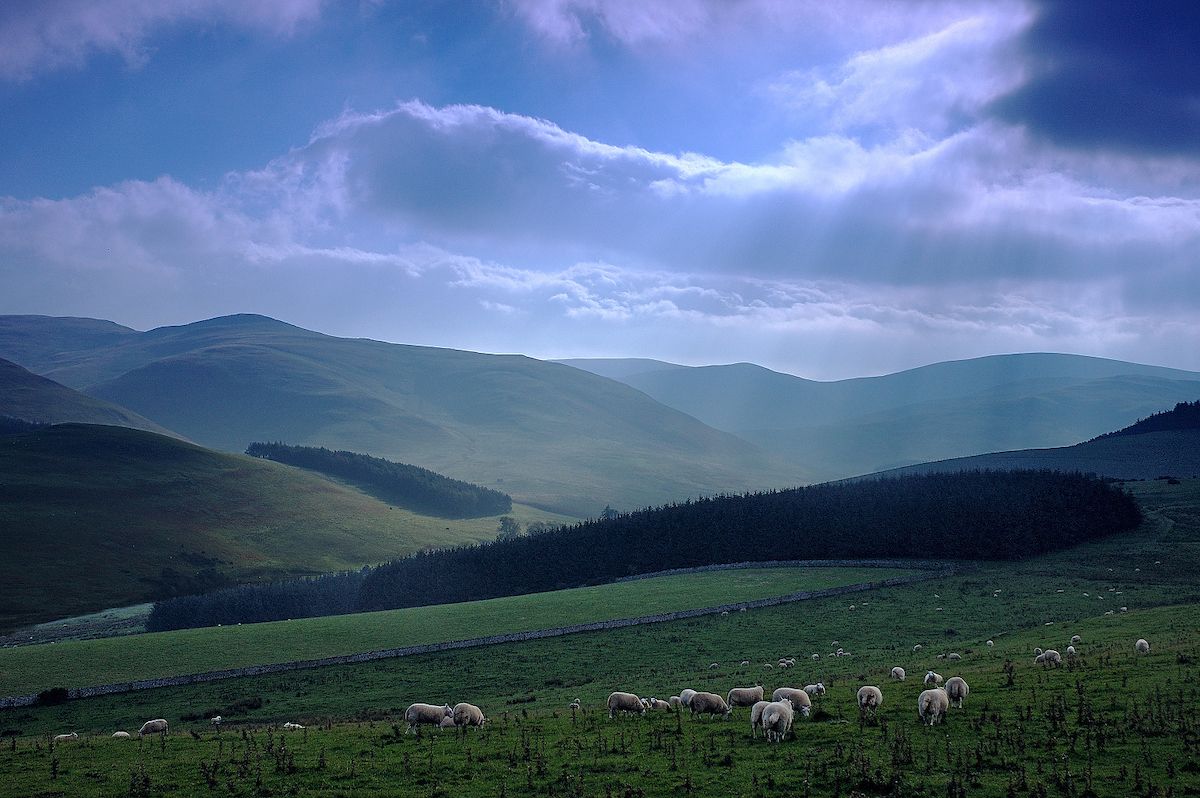 Amanda bought the furniture mainly through auctions and from the internet. “The little slipper chair I found locally, and I took it back to the springs and re-upholstered it. I also found a lovely tweed fabric called Cheviot which I’ve used on a lot of the furnishings. The bed I found for sale online. I’d been advised by friends who have a holiday cottage that romantic holiday lets such as this would encourage honeymooners and so they suggested I buy a bed with strong springs. The seller of this particular bed had originally worked for the cast iron foundry that made it as a sample, and had purchased it from them. So not only is it unique but indestructible, I hope!”

The window seats aren’t authentic but as the couple had to replace like-for-like windows, in the process Amanda took the opportunity to create more of a recess and space for window seats. “I’d heard about the Edinburgh Feather Company and I asked them to make deep feather-filled cushions which I covered in tweed. I think the window seats really add to the feeling of comfort.”

After two years, the Pigeon Loft is now ready for human habitation and Amanda is proud that they’ve finally got to this stage. “I do remember after we’d taken the roof off and my son Ed and I were standing up there in the ruins. He said, ‘Why are you doing this mum?’ I replied, ‘I don’t know honey, at this stage I can’t imagine it ever being liveable.’ He said, ‘Why don’t you leave it like this and we’ll have a hot tub deck?’

I have a photo of that time and it’s great to look back and see how appalling it was and what has been achieved. We’ve come a long way.