In response to the Coronavirus (Covid-19) outbreak, please read our book with confidence policy and guidance for guests for up to date information.

Coledale Stables - The line of beauty

A passionate angler had one thing in mind when converting Coledale Stables on the Tweed, but his wife ensured the design was divine as well... 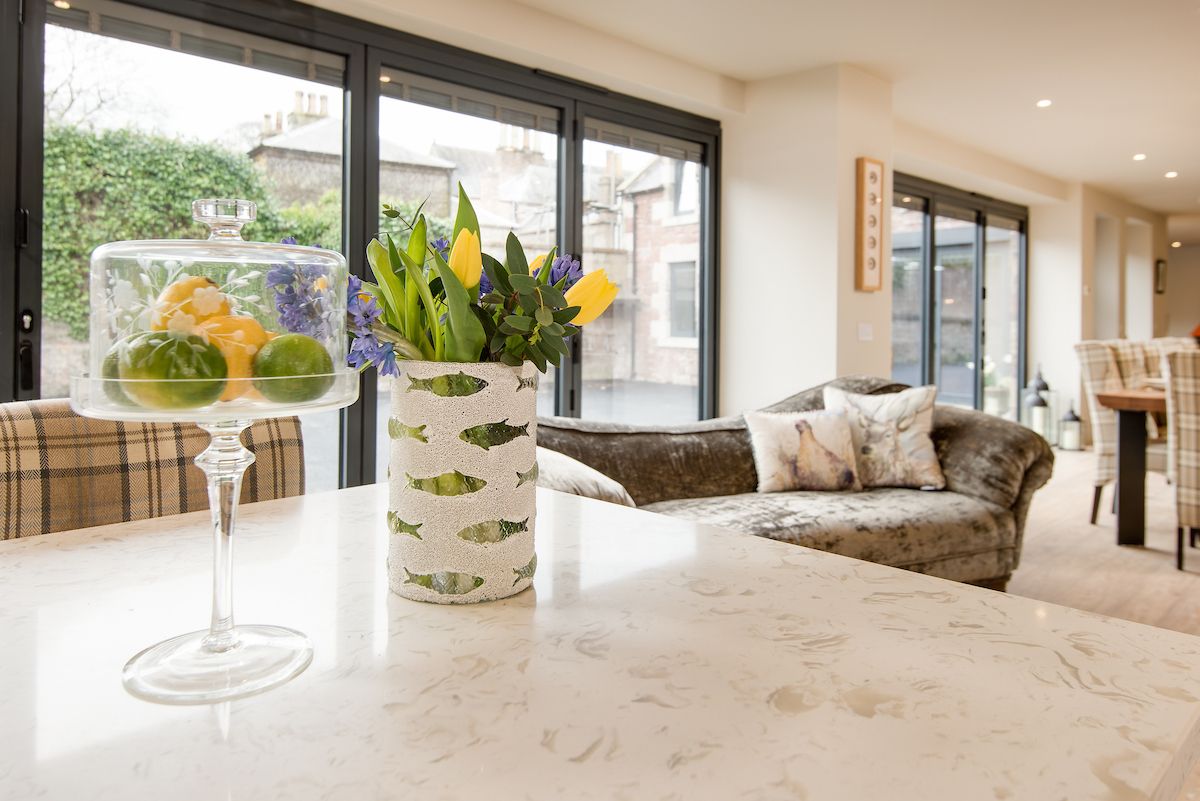 This article was published in 'Scotland on Sunday' on 23rd July 2017 and is reproduced here with their kind permission.

A disused council yard might not be everyone’s choice for a holiday home but for Simon and Joanne Cotton it offered the potential they were looking for.

Simon is passionate about fishing and for several years he’s been crossing the border into Scotland at least once a month to get his fix along the River Tweed. “Over the years I’ve stayed in hotels all around the Borders and more recently we started using Crabtree & Crabtree and rented one or two self-catering cottages from them. Eventually, I said to Joanne, ‘We come here so often we should really buy something.’ So, we started looking. Six years later we still hadn’t found anything that would suit us.”

As the owner of a building firm, Simon was always going to have high standards. “You can never buy exactly what you want,” he says, “but the problem was that nothing was even coming close. Eventually we decided it would have to be a new build, a conversion or a refurbishment.” In the end, the Cottons chose a combination of all three.

At first glance, Coledale Stables does indeed look like a stable conversion, which in some part it is. However, when Simon and Joanne came across it the stables were housed in a former council depot. “It has been out of commission for a long time and was being used as a storage yard, but the old stable block was there, the joiner’s workshop, the store – all in disrepair but still there. There were dividers running through the building and I said to Joanne, ‘If we take these out and lengthen the building we could do something with it.’”

The couple put in an offer which was accepted and a planning application was submitted. “We worked with an architect, Ray License from Ednam, who was very good. He had a meeting with the planning department about what we wanted to do and it all went ahead relatively smoothly.”

The plan for the site was to create not just a beautiful holiday home but one that totally met the needs of fishermen, and as an experienced angler, Simon knew exactly what was required.

“We already had a great location, the local pub is a minute’s walk away and we’re slap bang in the centre of Kelso, so that was the first box ticked. My next main concern was that however many bedrooms we had, we had to have an equal number of bathrooms, and we settled on four. We’ve always struggled as fishermen to find properties that have that and if you’ve got a group of pals together and you’re getting ready to go out everyone wants a shower at the same time. We have four showers and two baths and we’ve installed two heating systems so everything can be run together.

“I’ve also allocated storage space for tackle and rods and we’ve put in back-up fridges and a chest freezer to store any fish we catch and a preparation area. The south-facing courtyard is a real sun trap and it provides plenty of space for parking as well as being incredibly private.”

The couple also wanted to incorporate a bit of luxury and the wow factor. “Joanne loves interiors and design. I just do the building work but Joanne comes up with all the design ideas.”

These ideas included making the property predominantly open plan. “Joanne has done the interiors in many properties over the years and this time she wanted it all open plan but also no pipes, no radiators, very, very minimal.”

To accomplish this, underfloor heating was installed and a stunning talking point – the JC Bordelet log burner, which was sourced from France by Lloyds Fires in Derbyshire. “You can choose any colour or design you like. When we were deciding what to go for, they showed us one covered in zebra striped which I thought looked a bit obscure – where would you have that? And then I saw a picture of it in a hunting lodge in South Africa and it looked great.”

Another talking point is the feature wall in the living area which is a map of Kelso which Joanne commissioned. “I think it’s nice for guests to plan out where they are and see what’s around them. It takes in the area from Coldstream to Dryburgh Abbey, and it’s quite detailed.”

Solar bifold doors which keep the heat in when you need it and out when you don’t enclose the main living areas and complement the open plan atmosphere. Adjoining the courtyard when they open, they increase the living space ten-fold. The doors also incorporate remote controlled blinds within the glass which can be operated from inside the house or via your phone, as can the electric gated entry system. “It’s very secluded and very secure which is important for a holiday home, but it’s hard to believe you’re in the centre of Kelso,” says Simon.

“Ultimately, we’ve put in everything we think was missing in the holiday homes or hotels we’ve stayed in. I think we’ve got it right, but it is quite an odd experience setting up a home from scratch. They say moving to a new house is stressful, but when you have to think of putting in everything from a bath mat to a pizza cutter, it’s a big job.”

It has been a bit of a busman’s holiday for Simon, but at least on his next trip across the Border he’ll have somewhere to store and cook his catch. 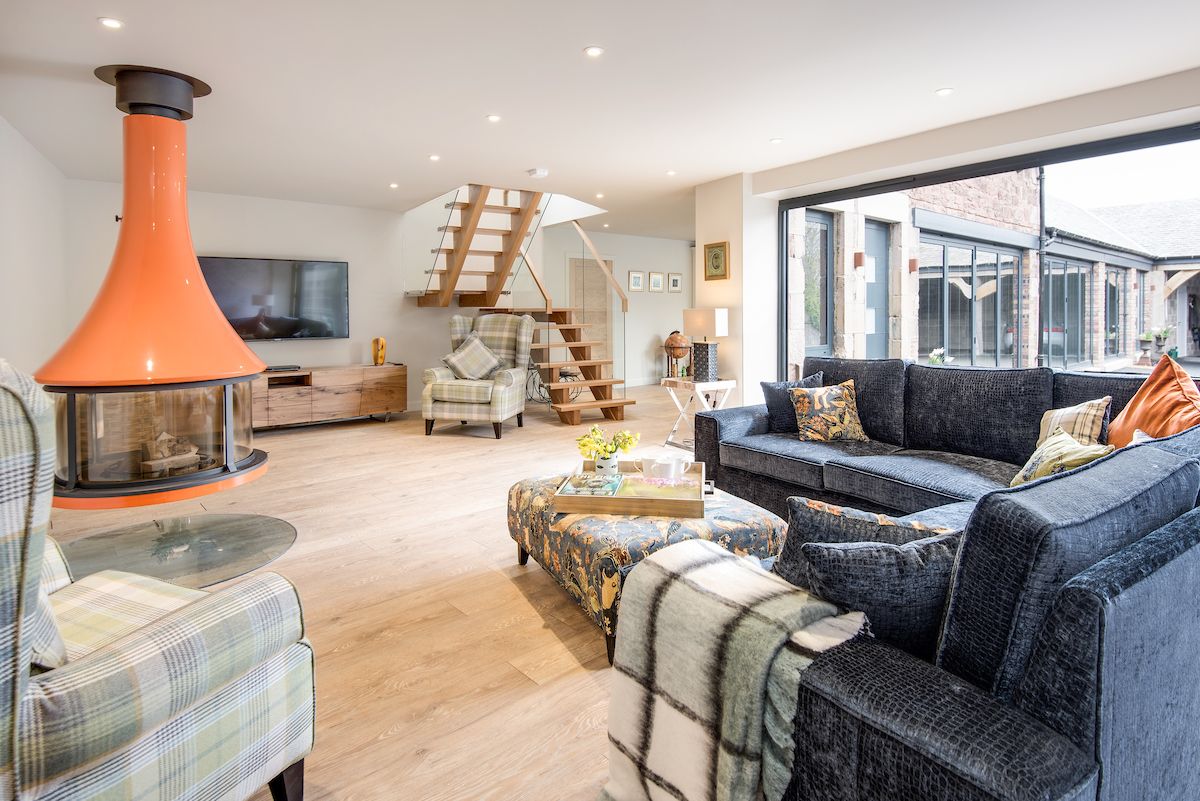 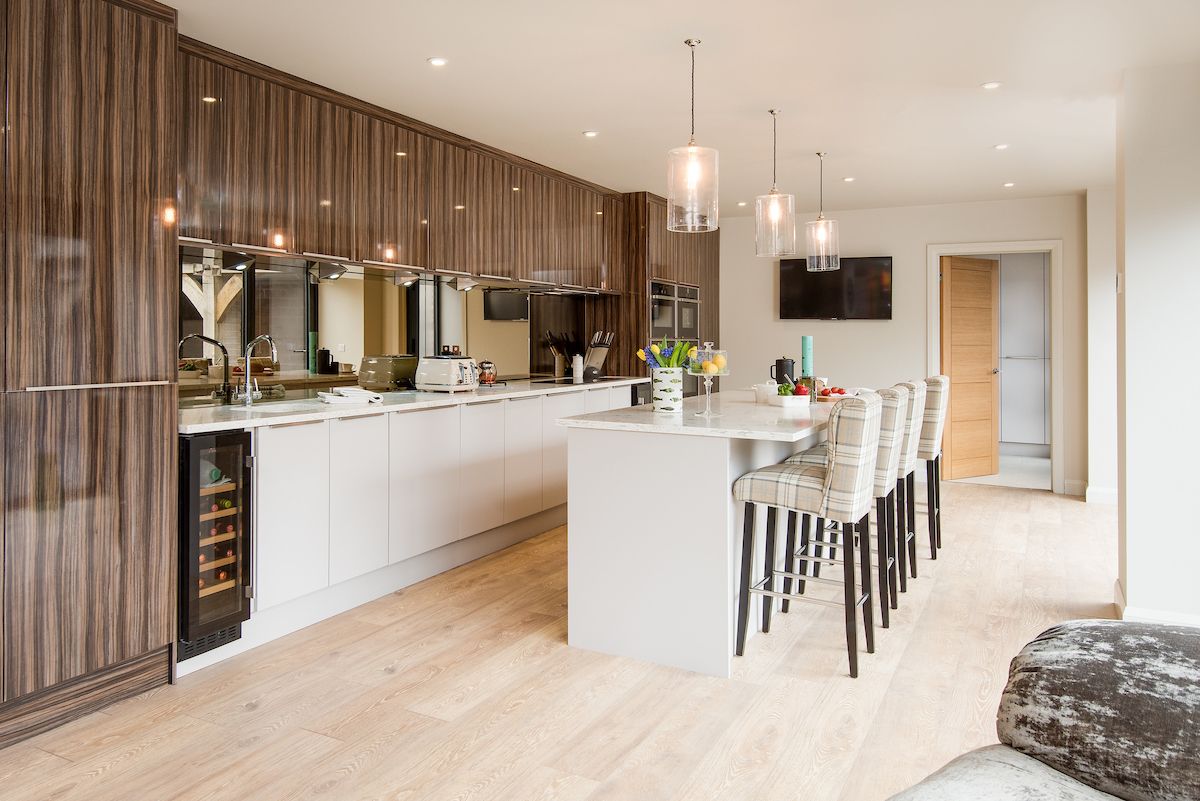 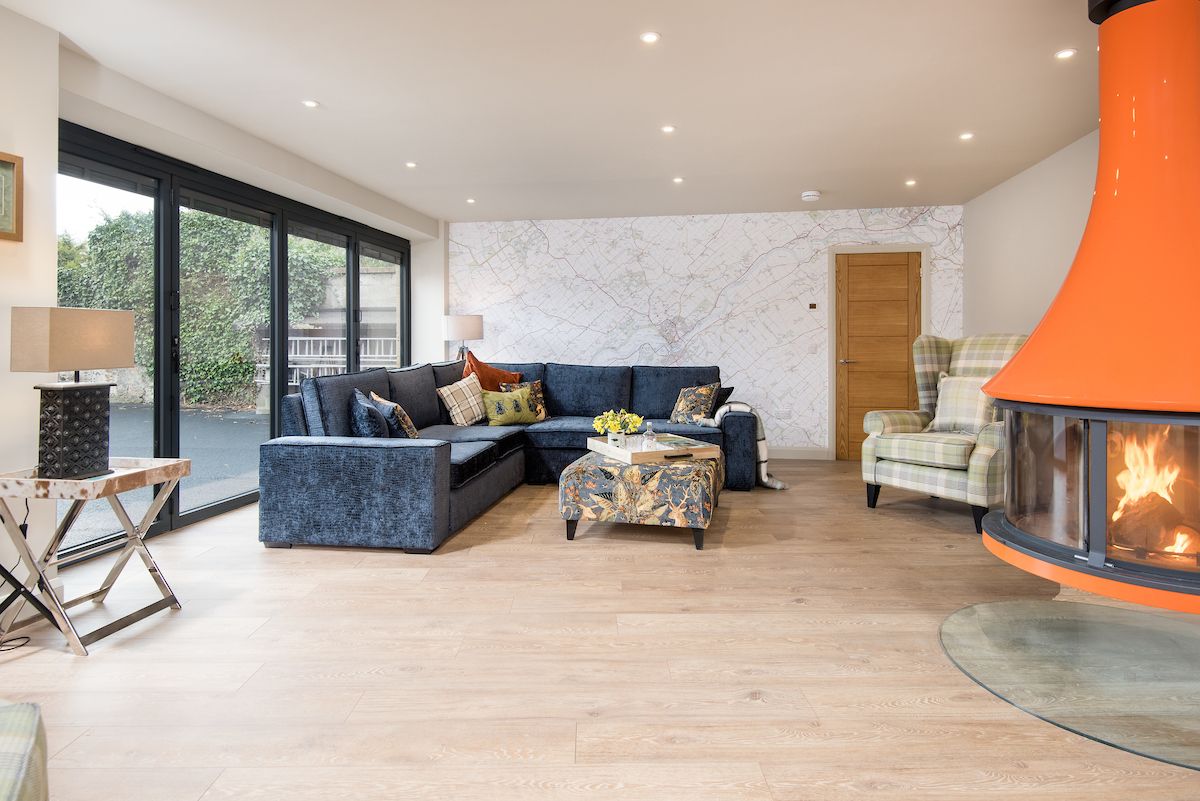 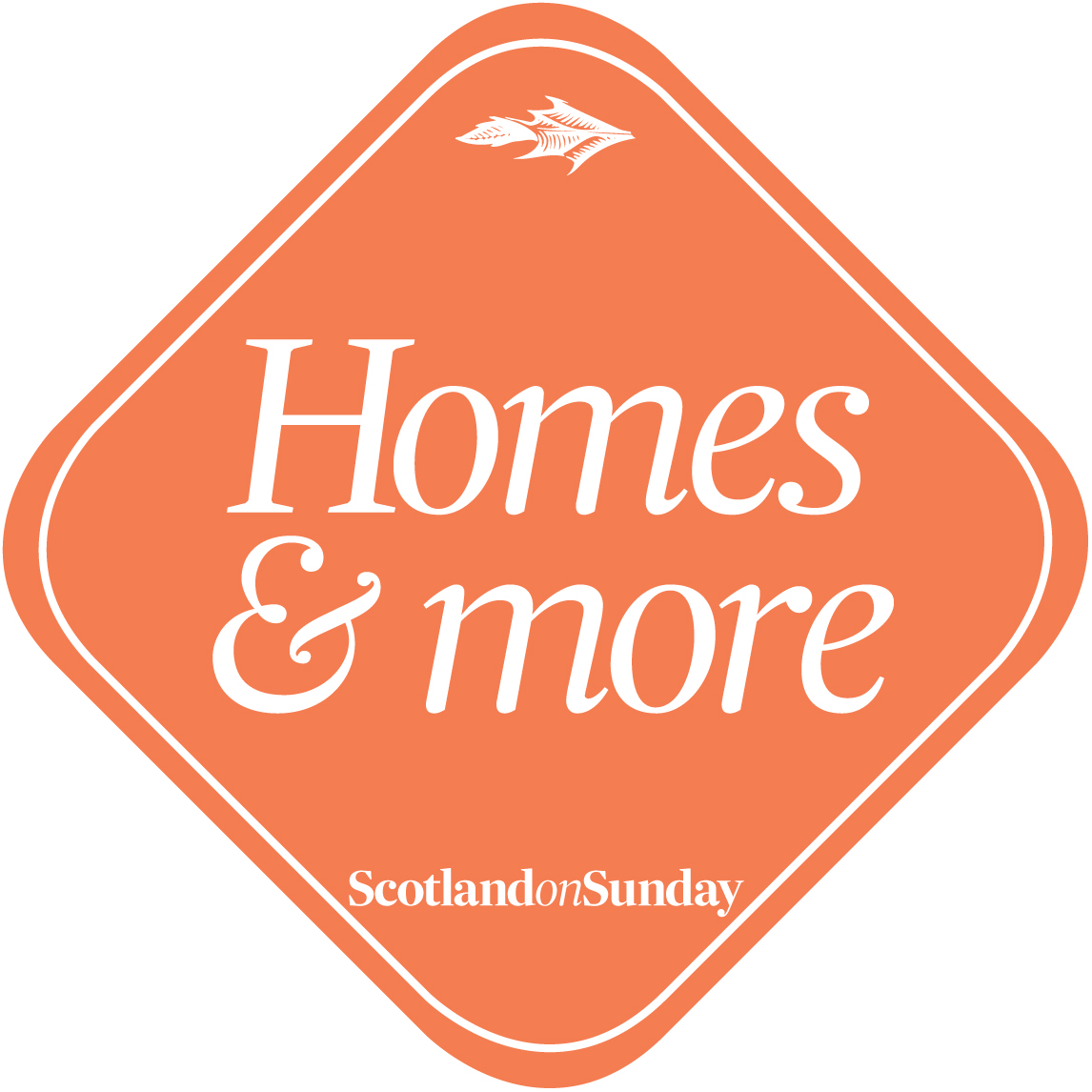